A Retrospective Of The Pensacola Naval Live Oak Reservation

Many moons ago, before the first great depression, the President Of The United States bequeathed a land grant to the Boy Scouts Of America apportioning a section of the Naval Live Oak Reserve just outside of Gulf Breeze, Florida. The Boy Scouts and Girl Scouts built two summer camps, Camp Big Heart and Camp Isabella Ingraham. Big Heart was placed on a high bluff, overlooking Santa Rosa Sound and the barrier island. The building was constructed of thin slat board and stood two stories high. Inside, the building was predominately a huge open room with high ceilings. A massive stone fireplace stood at the east end of the building, forming a large stone wall rising to the ceiling. Large wooden benches and tables stood in two rows on either side of the room. The building smelled, nostalgic…. 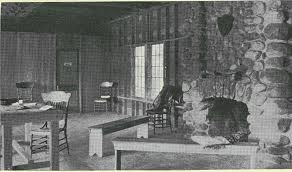 “What were some early uses of the Live Oak reservation on U.S. 98?

The first Boy Scout troop was established in Gulf Breeze in the early 1950s with Stan Hooper serving as Scout Master of Troop 11 sponsored by the United Methodist Church of Gulf Breeze. The first Eagle Scout in Gulf Breeze was Paul Villane. The second was David Villane, and the third was Jerome (Jerry) Lawson Duncan Jr.  When this area became a part of the Gulf Islands National Seashore on Jan. 8, 1971, these camps were abolished.” -City Of Gulf Breeze

Even though the camps were “abolished”, Scout Troop 11 continued to meet at Big Heart throughout the 1970’s. As a matter of fact, I was a member of the last Troop 11 and attended the last Boy Scout meeting at the great Camp Big Heart. Another interesting connection is, Paul Villane -the first Eagle Scout in Gulf Breeze, was my football coach and a friend of the family. He was a member of the First Troop 11.

One of our favorite pastimes while visiting Big Heart in those days was treasure hunting. The local folklore was rich with tales of missing Spanish Galleons laden with gold, lost while seeking safe harbor from storms. Or, buried pirate gold hoarded into the area prior to the 19th Century. Fact is, the area has been occupied by five different flags throughout the course of recent history.

Prior to that, well, we will get there shortly. On some weekends, the troop would arrange camping at Big Heart and it’s surrounding woods. The live oaks towering with spiraling branches reaching skyward like majestic wooden candelabras, supporting magnificent drapes of Spanish moss. 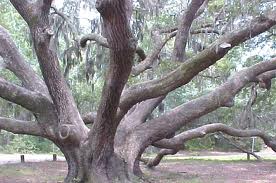 The bluffs overlooking Santa Rosa Sound, bearing the thin, white line of the barrier island and beyond to the Gulf of Mexico. Rich hues of Aquamarine from the comforting shade of the oak trees was truly a heaven on Earth. The soft ocean breeze remained constant excepting dawn and dusk, hence, the name “Gulf Breeze”.  It was easy to see why, prior to the invention of air conditioning, this would be the chosen spot for the largest Boy Scout summer camp in the Southeast United States Of America.

While treasure hunting one afternoon, I came across a unique find. It was a clay pottery item in the shape of a bird. It looked ancient in design based on relics I’d seen uncovered and deemed so at the “Indian Temple Mound Museum” in nearby Fort Walton Beach.

“The historic Navy Live Oak Reservation is unusually rich in archaeological and historical materials. Describing this area in 1883, S.T. Walker wrote (1885 p.859): ‘Immense beds of shell and the usual indications mark this as the former residence of a large population. The slopes of the hills are covered with irregular beds of shell from 2 to 6 feet in thickness which occupy an area of several acres.’”

The giant Hickory trees nestled amongst the Live Oaks have their own unique history. According to the Florida Anthropologist,

“The area has a good stand of Live Oak and Hickory (Pig Nut) trees. It was this feature which caused the U.S. Government to acquire the reservation in 1828 when timbers of this kind were used in construction of ships at the Pensacola Navy Yard. (Note: The timbers currently in the hull of the famous frigate ‘Old Ironsides’ came from this location [Lazarus, 1951].)”

As one digs deeper, no pun intended, one finds archaeological expeditions have been fruitful since the 1800’s in uncovering an ancient, rich cultural history in this area dating back not hundreds, but thousands of years. -An awe-inspiring thought.

As I perused the Florida Anthropologist from the University Of Florida, a photograph entitled “Bird Head Effigy” was nearly identical to the one found all those years ago. The effigy uncovered by them was only a mere fragment compared to this one: 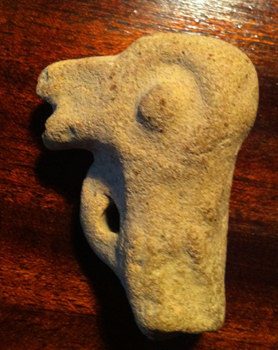 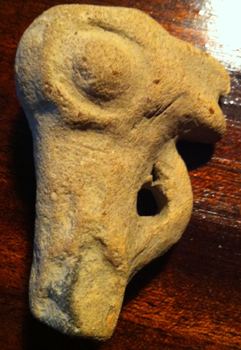 The conclusions of the Florida Anthropologist in 1961 were, the area was rich in artifacts from “The Debtford Culture” (800 BCE) to “Historic Times”.

Or, The Hopewell Culture?

“Hopewell pottery is the ceramic tradition of the various local cultures involved in the Hopewell tradition (ca. 200 BCE to 400 CE) and are found as artifacts in archeological sites in the American Midwest and Southeast. The Hopewell were located around the Mississippi and Illinois Rivers during the Middle Woodland Period, and the Hopewell Interaction Sphere spanned from the Gulf of Mexico to Ontario, Canada.” -wikipedia

What happened to them?

It appears that “Moore’s Raid” in 1704 and subsequent British slave expeditions from the Carolinas have generally been conceded as the death blow for pre-Columbian cultures from this region. However, a remnant of the Apalachee Indians did survive and escape to Mobile, Alabama. They later returned to the Pensacola area until 1763, when the British took over Florida. They were then moved by the Spanish to the Vera Cruz section of Mexico (Smith, 1956).

From The National Park Service:

The site of the marker was the first federal tree farm in the United States established by congressional resolution introduced by John Quincy Adams in 1828. Live oak (Quercus virginiana) was recognized as a superior wood for ship timbers. Widespread timber theft led to the need for a federally protected plantation.

The sign reads: This is the site of the first federal tree farm in the United States. Live oaks were once valued for their superior shipbuilding qualities. The U.S.S. Constellation and the U.S.S. Constitution (Old Ironsides), both launched in 1797, were built of live oak (using c. 160 and 460 trees, respectively). Timber thefts led to congressional acts in 1817 and 1822 for the purpose of supplying timber for the United States Navy. These acts prohibited the sale of public lands containing live oaks. An 1826 report to the Secretary of the Navy claimed two million cubic feet of live oak had been stolen from the South Atlantic Coast, probably “consumed abroad.” This resulted in the Timber Trespass Act of 1827, authorizing penalties for timber theft and the establishment of a live oak plantation. In 1828, President John Q. Adams introduced a congressional resolution establishing this site for the plantation and appointed West Florida District Judge Henry Marle Brackenridge superintendent. Brackenridge studied live oak history and began growing live oaks here. Some 1,300 acres of the original live oak reservation are now preserved by the National Park Service as part of the Gulf Islands National Seashore. – http://www.flsaf.org/heritagesites/navalliveoaks.htm

In 1828, the United States purchased the land which comprises the present Naval Live Oaks Area, with the goal of reserving its valuable timber resources for ship building. President John Quincy Adams authorized the establishment of the first, and only, federal tree farm on this site, beginning operations January 18, 1829. Superintendent Henry Marie Brackenridge, who lived on the tree farm, experimented with cultivating the live oak tree. He was perhaps our country’s first federal forester. – http://www.nps.gov/guis/historyculture/the-live-oak-story.htm

Being a student of history, I have relished the opportunity to have experienced Camp Big Heart at the Live Oak Reservation. A communal gathering spot for indigenous peoples to this area for thousands of years. 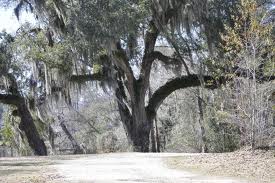 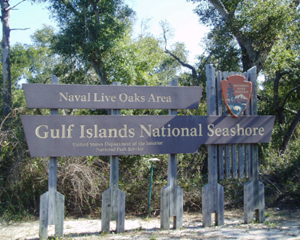